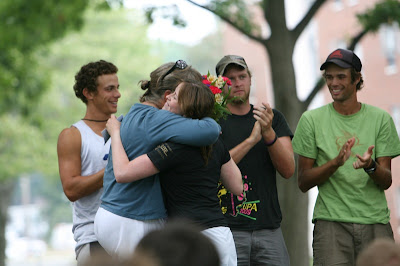 Session C has officially come to a close which wraps up the 2010 season of NUTC! I know that I have had a blast over the last four weeks meeting and working with young players who came from various parts around the country. I was fortunate to have the opportunity to watch them grow over each week as both on the field as players and off the field as individuals. There were many new faces but I was also glad to see the ones from years prior. Numerous friendships were made and will continue to grow. The introduction of NUTC Gold this year was a huge success and was the perfect way to celebrate the 10th Anniversary of NUTC. In today's Session C tournament action, both Green Meadows and Blue defeated their opponents in the semi-finals and held a close game until the very last point (as it should be). I hope everyone has a safe travels home whether you're driving across town or flying across the country. I look forward to next year with all of the fun and excitement that I know it will surely bring.

Until next year! See you on the fields...
-Brian 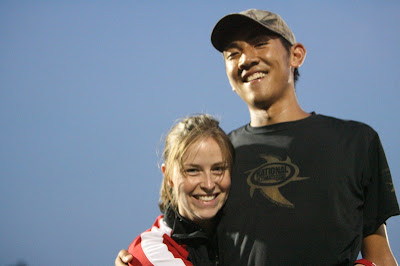 The sun is shinning and the discs are presently flying around outside while our stomachs digest from the awesome lunch at Valentine Hall. The camper v counselor game was a huge success last night as the counselors were able to prevail over the campers. The final score of the game last night was 21-3 (it should be noted that as always any points scored against the counselors are always great to see and are usually hard fought -- the counselors will never give them an inch!). Upon completion of the game the campers and staff trekked across campus back to the dorms where the ice cream sundae station was waiting for us to dive in to.
This morning the six teams formed pairs to learn and practice zone offense and defense. Each team was then able to modify it as they wished to add their own flair and figure out how to implement it best with their players. In just a few minutes during this afternoon session will start both the disc olympics (distance contest, MTA -- maximum time aloft, disc golf and disc spinning) and the first round of the tournament. No doubt in my mind that there will be some great moments for photos and laughs. More coverage later but it is time for me to hit the fields!

Welcome to Session C: The Final Chapter of 2010! 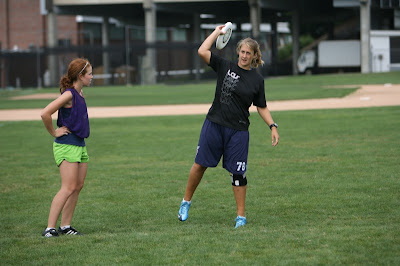 
This is just a brief entry as I am heading down to the fields to record more action. Yesterday, saw some great ultimate action and I can already tell from this morning that the players are continuing to improve greatly. The campers are playing hard and are very excited for tonight's camper vs. counselor game along with the ice cream sundae bar afterward. It will be interesting to see how they stack up against the previous weeks in how many points that they score against us. The current record is 5 points. Field time so enjoy the photos!